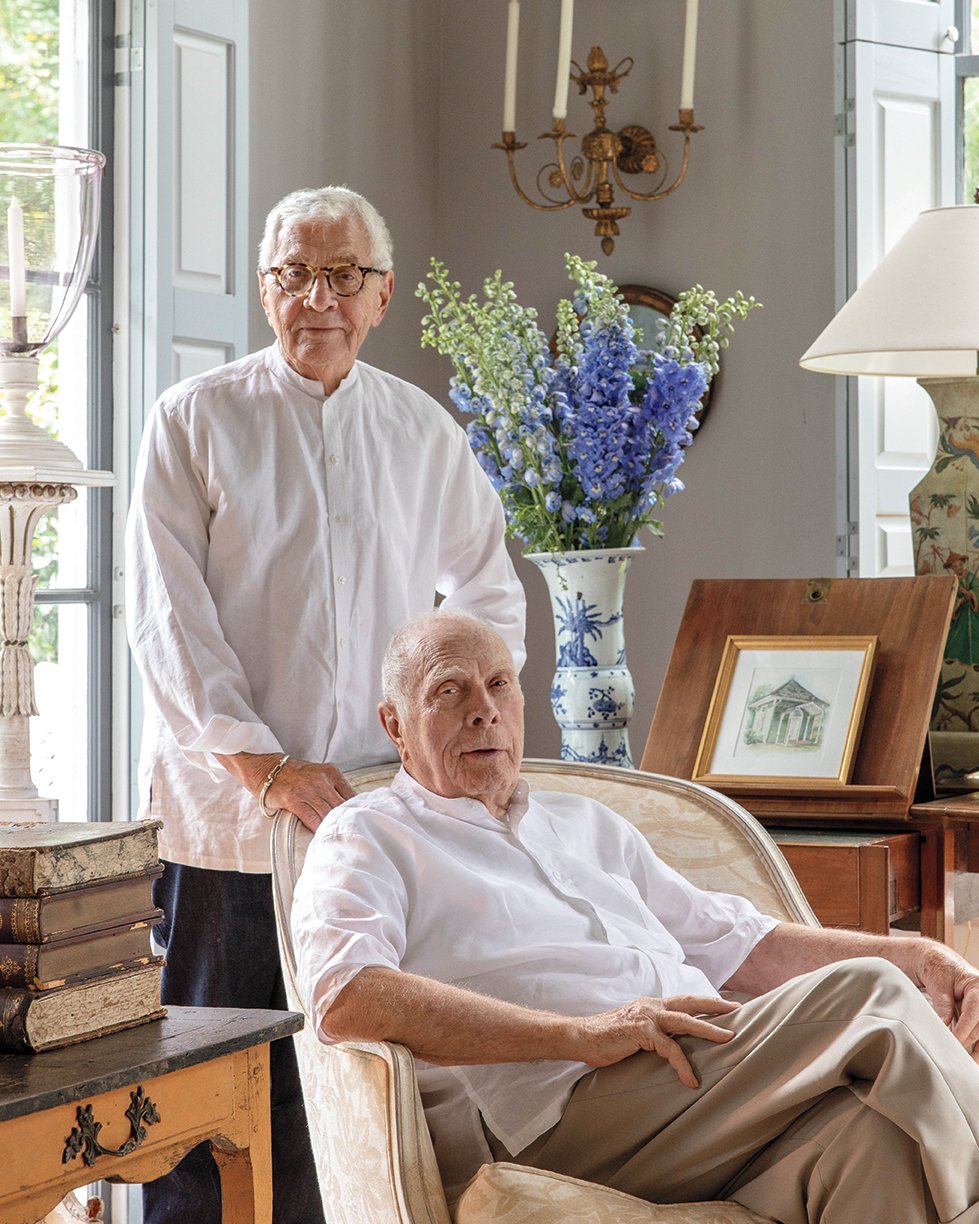 In fond memory of Furlow Gatewood (August 28, 1921 – October 29, 2022), we wanted to share this story about Furlow’s new collection, Furlow’s Folly, with his dear friend John Rosselli, published in the Winter 2020 issue of MILIEU.  Even at the young age of 98, he never stopped designing beautiful pieces for the home.  “Furlow Gatewood: Always loved. Never Forgotten. Thank you.” – Leslie Newsom Rascoe, MILIEU Design Director, and producer of “Furlow’s Folly”  for MILIEU

Friendship and trust—coupled with innate taste and discerning eyes—underpin the successful five-decade-long collaboration between Gatewood and his business partner, John Rosselli, the husband of renowned interior designer Bunny Williams. It’s also the foundation beneath “Furlow’s Folly,” their new collection of decorative painted hall chairs, pedestals, tables, consoles, and jardinières half a century in the making. 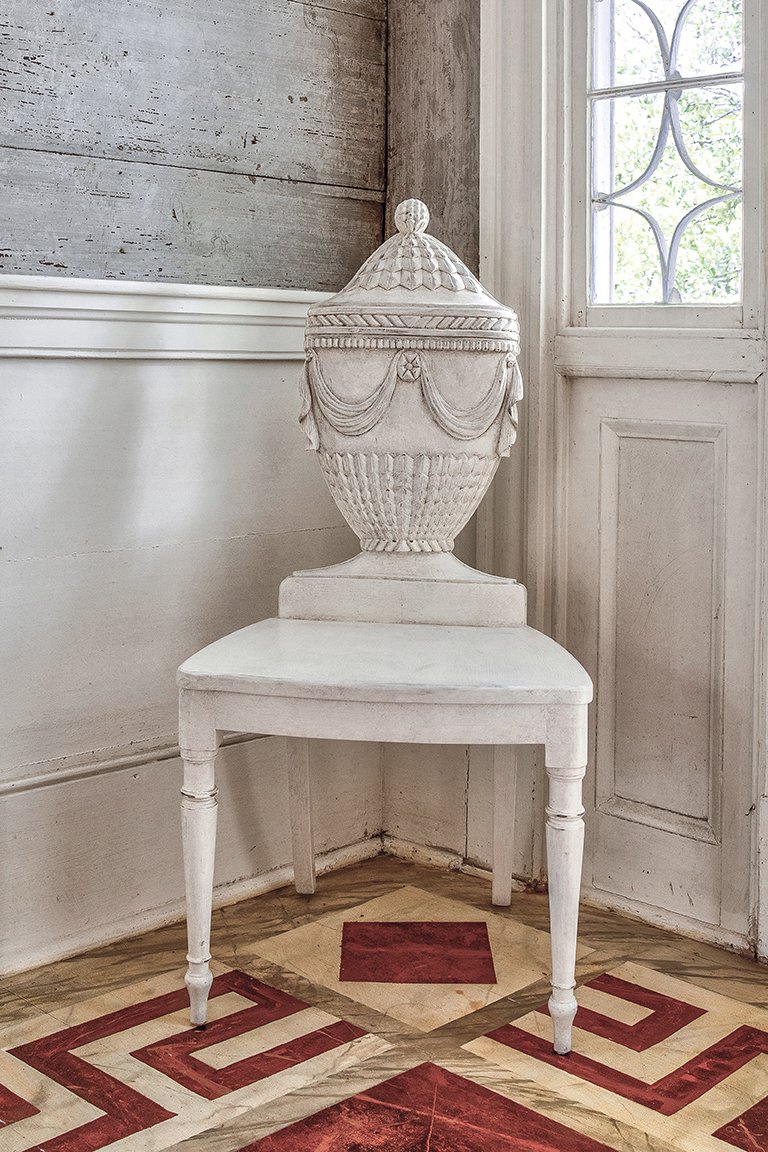 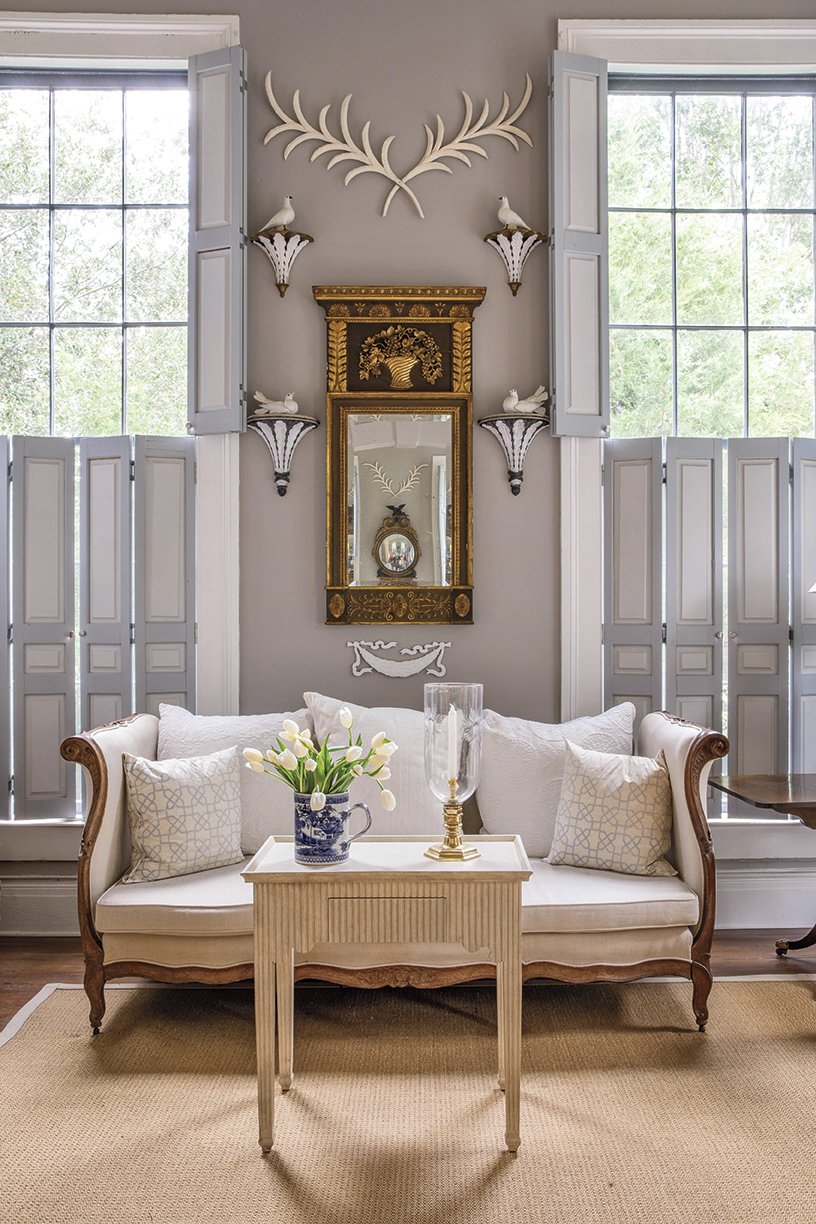 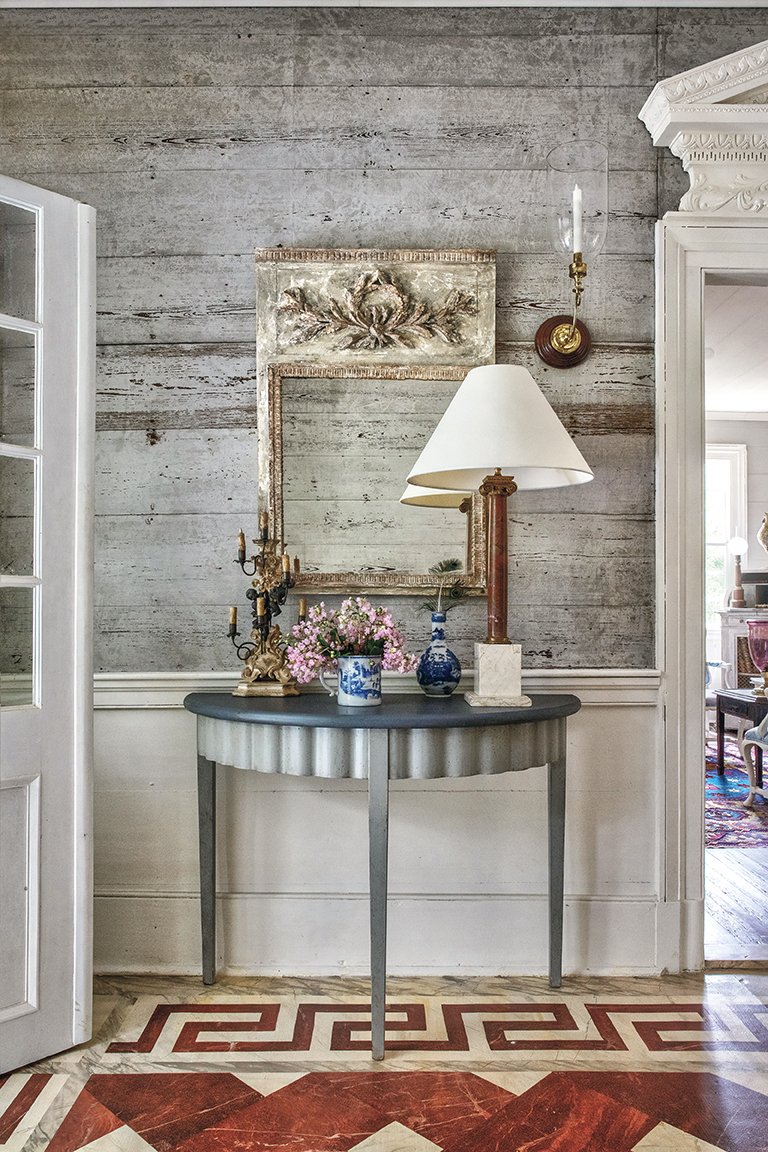 These talented and influential members of America’s design community were New York City shopkeepers who became friends in the 1960s. “We were a close-knit community of antiques and boutique shops then,” recalls Rosselli, “and we were all familiar with one another. Furlow had a shop on 66th Street, near my own, filled with lovely things. He became discouraged by how business was going in New York, and I suggested we combine our businesses. I was planning a buying trip to London and needed someone to take over the shop, so he moved his inventory over and that was that.”

“When we met,” says Gatewood, “I was a Southern transplant and John a first-generation Italian–American, both trying to make it in New York. In many ways, you would probably consider John and I opposites, but that combination has worked for many years.”

“We have similar tastes,” adds Rosselli, “And Furlow is a very ethical person, so we never had a signed agreement. We valued each other’s opinions, we worked independently, and we’re both from a generation in which someone’s word was all you needed.”

The men also had a common drive and interest in decoration, friends, travel, cooking, blue and white porcelain—and a love of animals, including several whippets over the years. “I don’t think many business relationships would survive these days based on a handshake,” says Gatewood, “but we’ve been working together for so long that at this point it’s like breathing air.”

The inspiration for the “Furlow’s Folly” collection was an old magazine clipping featuring a table with palm carvings. Determined to bring the piece back to life, Furlow had the parts carved in the Philippines and Rosselli set to work developing a paint finish. The result of that effort is the new Americus Palm Table; like other items in the collection, the table is based on a traditional design that was no longer possible to find. 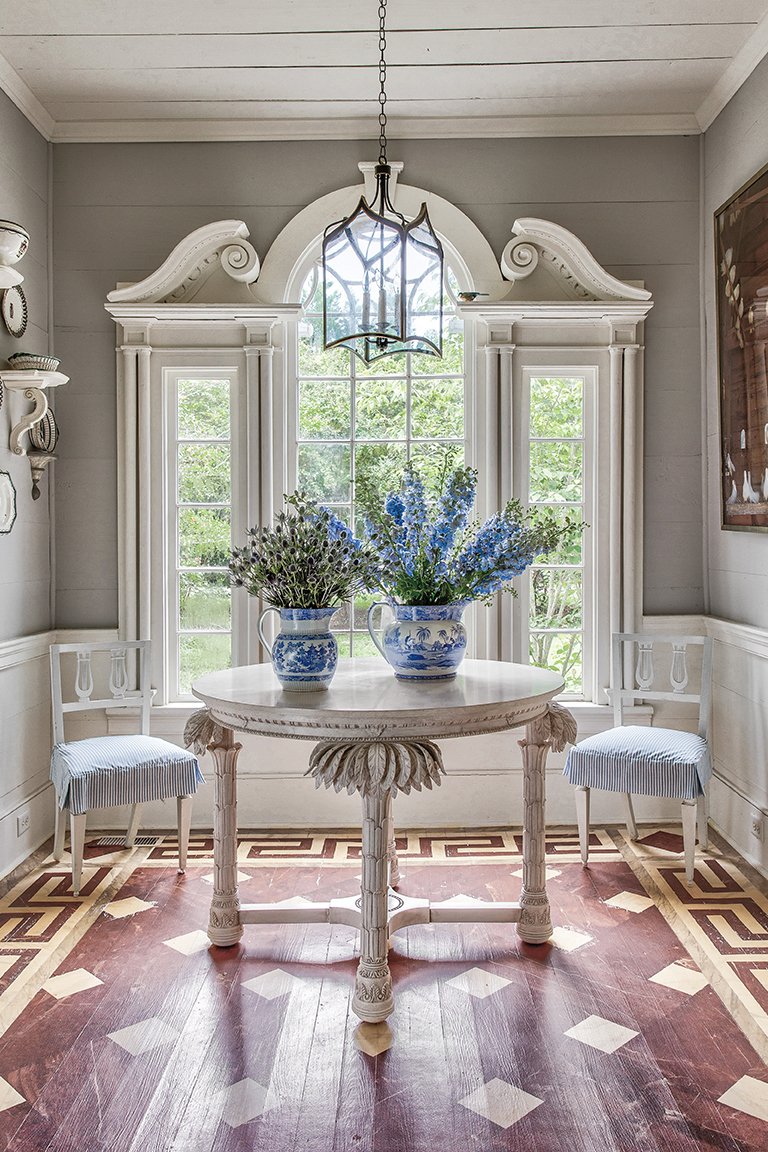 The entire collection focuses on painted finishes, for which Rosselli is well known. As he explains, with a reference to legendary interior designer Mrs. Henry Parish (“Sister”), “I recall Sister Parish saying, ‘In every room there should be at least one piece of painted furniture to lighten the mood and bring a sense of whimsy.’”

Adds Gatewood, “The collection features a range of influences, but it’s important to show that it’s okay to mix a Chinese coffee table, Gothic console, and Delft jardinière to see how they work together in a space.” 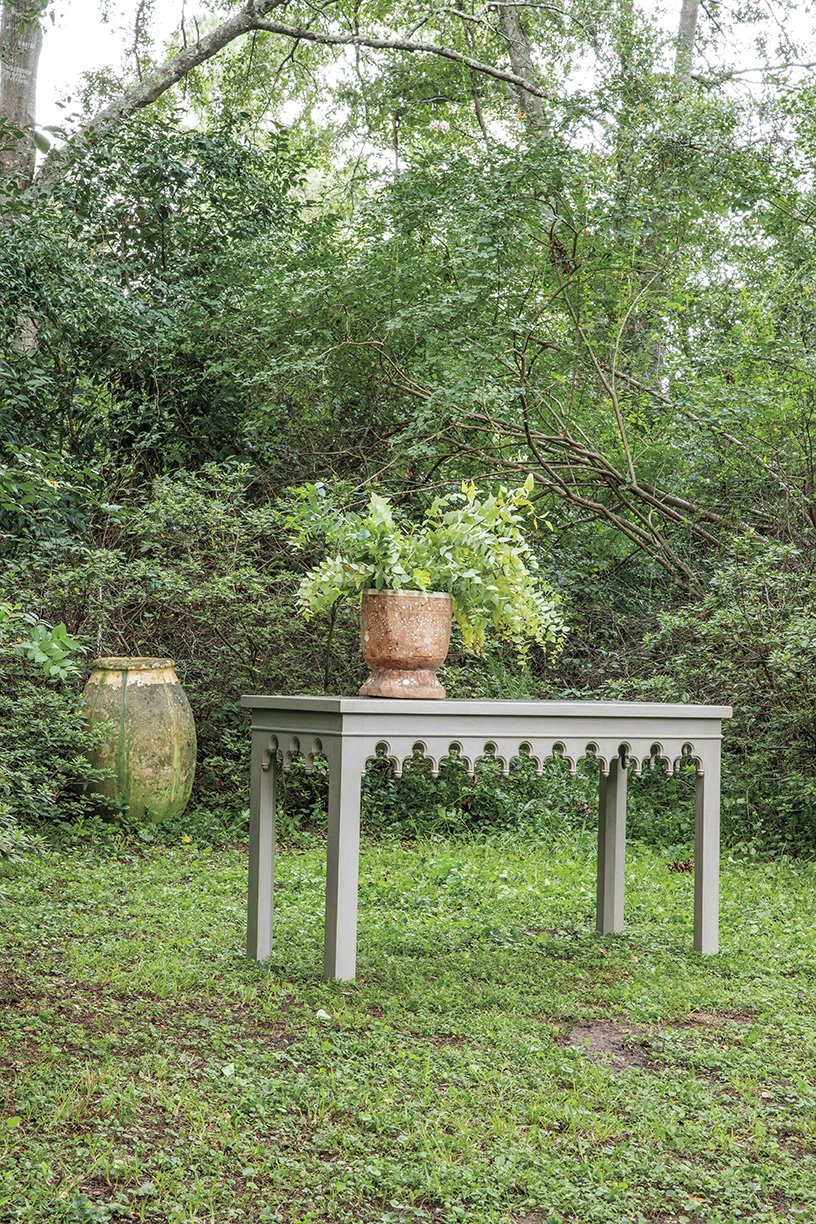 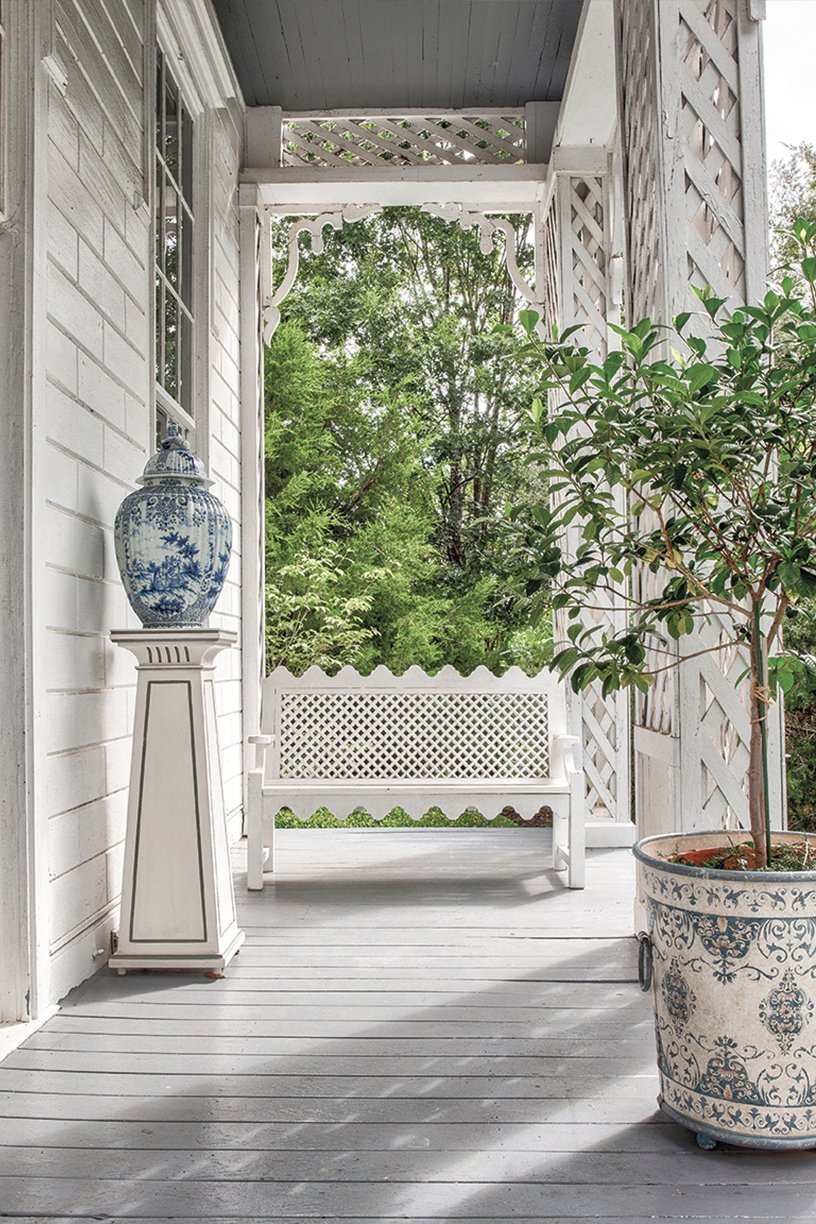 In discussing the collection’s development, Gatewood says, “John and I are always working on something new based on what we like. There’s never a sense of deadlines or things we ‘have to’ introduce, and this is more a collection of ideas we’ve had over the years that have come together now. We never really know how things will sell, but as long as we like it or find a need for it, we think it has value.”

Rosselli jokes that they launched this line now because they “weren’t getting any younger,” adding, “I also wanted Furlow to receive the design recognition he deserves.”

Gatewood says that not all the pieces that came to his home in Americus, Georgia, for the photo shoot made their way back to New York. “I am my own best customer,” he says with a chuckle. “And at ninety-eight, I’m still happy to add new pieces to my own home—if for the only reason that change is exciting.”

Visit johnrosselliantiques.com to see this collection.

To purchase this issue in print visit the MILIEU Newsstand or visit Zinio.com to purchase in digital format.