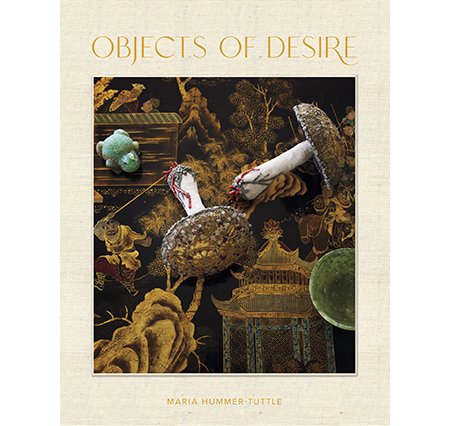 Maria Hummer-Tuttle understands the objects she owns—that they needn’t be valuable to be of value. Although she has long appreciated this perspective on the artworks, statuettes, jewelry, dishware—even the crayon drawings done by her grandchildren—in her possession, Hummer-Tuttle came to understand it in a profound way years ago while in her Los Angeles home. As she recounts in Objects of Desire (Vendome Press), an approaching brushfire threatened the house. With only a short amount of time to do so, Hummer-Tuttle gathered what she considered of greatest worth—photo albums, framed photographs, a few artistic creations of minimal monetary value.

“When I received word that the danger had passed, I quite literally stood back and looked at the rather large pile on the floor,” she writes. “What struck me at first was what was not there: no jewelry except what I was wearing; no clothes, not even something to sleep in or change into in the morning. I had chosen virtually nothing practical.” That epiphany inspired her to then ask herself, as she does throughout the book that documents the things she and her husband live with in their three residences: “What is it that we really value and why?”

While Hummer-Tuttle has distinguished herself as a lawyer, leader in arts organizations, and philanthropist, she also comes across as a philosopher of possessions. In showing a selection of the goods she and her husband, Robert Tuttle, a businessman and the former Ambassador to the Court of St. James’s, own, she ruminates on their personal value, more than their monetary one. Sometimes she even describes an object, such as a brass snail, as a poem: “Alert to its status,/His placement,/Leaving no trace of his movements by dark.” Of a fish fossil in stone, she writes, “Every house should have in it something more than a thousand years old.”

A love story about objects, her book is also the tale of her marriage. “Upon reflection, I believe the fun of the hunt is the hunting with him,” she writes of her husband and their long union. She reflects, too, on the inherent itinerancy of things. “lt has always interested me that physical things so often outlast those who own them.” With this book, which functions as a record of such things, we, too, get to live, for a while, with what matters most to her. —David Masello